11) Cook a whole chicken. I've had this chicken in my freezer for ages and I have no idea what to do with it. Suggestions welcome.

In early March, I finally pulled my chicken out of the freezer and put it to work. And by work I mean letting it slow cook in its own juices for half a day in order to become a very tasty dinner for me and my family.

I used the recipe found here at the 100 Days of Real Food blog at the suggestion of my friend Meredith. It was really so incredibly easy, I am ashamed to have kept that chicken frozen for as long as I did. 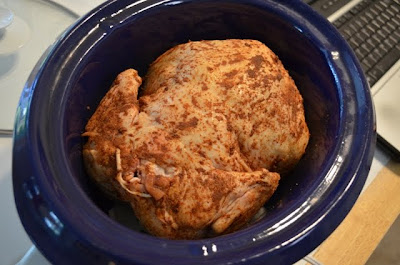 Here's what the chicken looked like with rub applied, before cooking. Whoops! I forgot to take an "after" picture; I was too busy eating.

We ate about a third of it that night along with a salad of penne, grape tomatoes and fresh spinach tossed in an olive oil and vinegar dressing. It was my first experimental "real food" meal which was received by the whole Blair clan with enthusiasm.

After that, we used the leftover breast meat for cold chicken sandwiches and a homemade bbq chicken pizza. The rest of the meat was frozen for an eventual pot of chicken soup. Plus, I used the further instructions from the recipe to make my own overnight chicken stock which has come in handy for several meals since.

Definitely a big thumbs up to this recipe, plus the blog is worth reading. We've been incorporating some of the ideas and recipes around here for the last month and it's been a good change. I'm not 100% sold on following all her guidelines, but there are some of them that I can really get behind, like only eating things with ingredients that you can identify and choosing homemade over store-bought whenever possible. I've definitely got a lot to learn, and I'm no food snob (yet), and I will kick and scream if you dare call me a "foodie", but having two impressionable little mouths to feed has forced me into rethinking some of our food choices.

It's funny how long I fought this, actually. I've known that sooner or later I'd have to address this nagging voice in my head that kept telling me to change, but I'd been so turned off by other condescending food-worshippers that I wanted nothing to do with it. I think I know exactly what it feels to be an atheist who finally accepts Christ but swears he'll never be called "born again". It's like tapping into something that is so ancient and true that it precedes all modern trends and labels. Somehow you want to capture the eternal message without all the contemporary trappings (judgmentalism, arrogance, insensitivity, political persuasions), but sooner or later you've just got to accept you're "one of them".

But you don't have to be a jerk about it.
Posted by Emily Blair at 4:32 PM