It happened again: a certain social-networking site ruined my perfectly good - and sunny! - Saturday afternoon. I just wanted to pop on for a second, see if I had email, you know, and there it was: one of those posts...on parenting.

I don't know why I read it; the same thing happens every time. I guess I justify it by thinking that if I know what people are saying, I'll be better at arguing my own points of view. But instead of just taking an objective interest, it got me all worked up and I began typing a quick-fire comment about why I disagreed with the article. I had six or seven points to start, but now, after an afternoon of dwelling on it, could maybe fill a short best-selling book with my thoughts.

I didn't leave the comment, at least. I'm usually smart enough (or cowardly enough) to know I don't really want to invite controversy into my life. It still bugs me though. I mean, the article still bugs me and I still want to post a counter-argument for every illogical, foolish, emotive sentence in the thing. But more than that, it bugs me that it bugs me. I hate that I can't let go of stuff like this. And I mean that sort of in a "live and let live" kind of way - but not that generously open-minded - more in a "don't let other people's opinions ruin your day" kind of way.

My annoyance about a post on parenting should not distract me from enjoying my own sweet daughter's face and laugh. I may not be a fool, but clearly I'm the loser here. 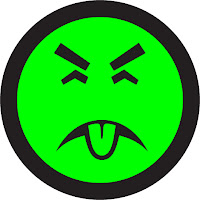 As of January 2nd, Operation De-Clutter is officially underway in the Blair residence. Already, we have cleared out over 50 books (hopefully, to sell) and have posted our hutch on Craigslist (and got 3 bites today!). I am encouraged. I'm sure there's no way I could manage this on my own right now, so I am extremely grateful for my husband's motivation. It's just so exciting to think about simplifying our lives a little, letting go of things that need it, and maybe making some money in the process.

I'll keep you posted on our progress.
Posted by Emily Blair at 12:35 AM No comments: