It's been a while since I've written and, if you were to come inspect my organizational progress over the last month, I would be ashamed to admit there has been very little. Still Bea's closet is overwhelmed with my junk. Still the pile on the table in our bedroom sits untouched. Still the taunting boxes of file folders rest at my feet as I type, with an ever-growing amount of paperwork on top.

I have reasons - excuses - and they are good ones, but I won't bother explaining. Let's just say I've got other demands on my time right now.

However, despite my inability to let go of the tangible cluttering around me, I have more stories to tell, more memories to divulge, more shame to dump out and bury forever. Here's one that came up recently:

I was digging in storage last week for my box of fall decorations (which I never found, by the way - our apartment is going pumpkin- and turkey-less this season, sadly). I did find a box marked "Emily - Clothes" though. Inside were such treasures as the electric blue '80s full-length spandex jumpsuit that my friends gave me as a teenager, the hot pink dress I made for one of the (many) school dances I attended without a date, my old tennis uniform, and about 20 t-shirts from various events, places, and organizations of my past.

I figured the t-shirts were doing no one any good sitting in a box and that I might as well use them as sleepwear, if I never wear them in public. So I unloaded the lot into the laundry basket and they are now filling up an entire drawer of my dresser.

These t-shirts are each a memory in themselves; they represent a time of life for me that I want to remember even though I don't necessarily want to wear something that is men's size XL, roughly the shape of a major appliance, with sleeves that hit about two inches above my wrists. They all have stories, the kinds that tell "I went there" or "I did that".

One shirt in particular, though, tells more than just that story. It's the YHM t-shirt from 2001. YHM (Youth Hostel Ministry) is a program that I participated in while I was a student at Wheaton College. In 2000, I was part of one of the teams that went to Europe and worked in a youth hostel in the Red Light District of Amsterdam for two months. In 2001, I served as the Secretary for the leadership team, helping to train and equip the next year's travelers for their summer abroad.

As part of my duties as Secretary, or because I asked for the responsibility - I can't remember which - I was in charge of designing the t-shirt. Pretty much every organization imaginable on campus had a t-shirt. It was kind of a pain. I mean, as if you needed any more reminders that you came from significantly less money than most of the student body, you'd have to shell out $10 or $12 for a t-shirt every time you turned around even though you'd probably never wear it and it would one day just end up in a box in your storage along with the 20 other t-shirts you accumulated while you were there.

This didn't stop me from relishing my design task. It was so much power: people would be required - at least once when we had to host a chapel service - to wear my t-shirt. I would probably design the coolest t-shirt ever created in the history of campus-organization t-shirts and probably everyone would wear my t-shirt long after it was thread-bare. I was thinking big.

I got too conceptual. See, I had this whole idea about how you go out there [into the world] and your life is on display for everyone to see, you travel, you work, you play, you meet people, you live, and meanwhile all the things you do are speaking the Gospel. I thought of living life "on the air" as in, live from New York, as in everyone's listening, as in, whether we like it or not, we are broadcasting the name of Christ to the world all the time. So I dug up a nice clip art radio tower for the back of the shirt, and a cute little corresponding "ON AIR" tag line for the front. A relevant Psalm 73 verse completed the look. I thought I was very clever.

No one got it. As soon as the t-shirts were distributed, I started getting questions. I had to print up an explanation for the design and hand it out at our next group meeting. That was dismaying for certain, but the really critical thing wasn't my failure to communicate, it was the shirt itself. You see, I couldn't find the exact image of a radio tower that I had in mind. I was picturing something kind of simplistic - that "less is more" kind of thing where a few seemingly careless brush strokes magically form a jovial version of your object of choice.

Just now, I did a search for "radio tower" in MS Clip Art. Apparently, the clip art catalog has expanded dramatically since 2001:

Instead, I chose an image that had six colors. Six filled-in colors that must have been transferred onto the t-shirts via industrial-level paint rollers and were encrusted an eighth of an inch thick, giving the entire backside of the shirt a plasticky, immovable feel to it. I had also opted for long sleeves which, of course, were two inches too short on me. The combination of six printing colors and long sleeves made the shirts cost $18 a piece. People grumbled. I didn't blame them; I didn't even want to own that shirt when I saw it. 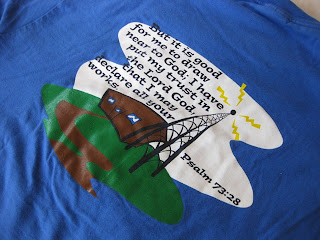 So now, it's years later. The shirt is not that bad. It's not a style I'd like to wear, but I doubt that anyone was as critical of how it turned out as I was. Yet I still feel kind of nauseous when I see it. And, like all my other Shameful Memories, it's mostly because of the pride that went before the fall. At least I'm beginning to see the theme. Maybe there is hope for me.
Posted by Emily Blair at 4:01 PM